What's Wrong with Being Confident?

Everyone in life is on a journey. For some people, it's setting goals and then working step-by-step to achieve them. For other people, it might be an internal journey to heal hurts in their past in order to move forward. Everyone is on a journey, because we are all just passing through. Earth is not our home.

I certainly haven't arrived, I'm still working on walking this journey. I had regressed my thinking and attitudes so far over so many decades that I didn't realise how deeply they were ingrained in me. To build upwards, you first need to dig downwards.

For so many years, I hated the way I looked. I mean, I *h a t e d* my appearance. Whenever I looked in the mirror (when I could stand to look), I was repulsed by the sight. I didn't look like the popular girls at school. I didn't look like all the girls with boyfriends, and I certainly didn't look like the type of woman that men go ga-ga for. I was resigned to the fact that I was stuck looking this way, and so I'd better get used to being ignored by the opposite sex and getting turned away from opportunities in life because of my appearance.

When society holds up the ideals of beauty, women are bound to measure themselves against them. I can't speak for everybody, but I can certainly speak for myself. I was living in this beauty eco-system without even realising. Regardless of how adamant I was that magazines and movies and social media didn't affect me, if I was really honest.. it did affect me. More than I was even aware.

I measured myself to what I believed our society and western culture were defining as beauty. I was determining who a person was based on how they looked. I was measuring who I was and my influence on the world based on the size of my hips, and I was judging my unworthiness of being loved according to the number on the scale.

And this is where the catalyst commences.

Along comes this wonderful man who pursued me, even though I ignored him and turned him down. I couldn't believe that someone would think I was attractive enough to chase me down. I mean, hadn't he seen the size of my derrière? Had he failed to notice that I had more curves than a country road? The irony of this moment is that the thing that attracted him to me was, in fact, my shape. Could it be that there was actually nothing wrong with me, and instead, my paradigm of beauty was the thing that was distorted?

So rather than avoid social media, because after all, it just perpetuates the negative stereotypes of beauty, I followed more people. I searched for a role model with body positivity and curves and came across these two women: Iskra Lawrence and Ashley Graham.

These two women are plus-sized models... what? But they're beautiful! They have abs! They model lingerie and bikinis and everyone swoons over their 'fine curves'! They wear clothes that I traditionally thought a curvy girl would shy away from, but there ain't nothing shy about them. They acknowledge they have cellulite and stretch marks. They worked out and worked on their assets. Iskra looks flawless without Photoshopping, and Ashley was the love interest in Joe Jonas' latest video clip for goodness sake!

And then the penny dropped with THIS photo. Nothing poignant about the photo other than the fact she looks sexy as hell. She's curvy... and people love it. 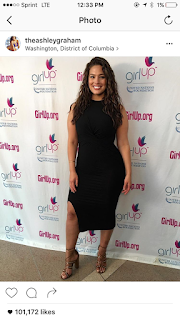 It was at this point that I realised something... it doesn't matter your size or shape... what matters is confidence. Curves are beautiful, but confidence is sexy. You can pull anything off when you're confident. So the difference between myself and these two women wasn't really anything more than confidence. We all had curves, but these women embraced them and used them to their advantage. They loved the skin they were in and promoted body positivity. They were healthy and normal and damn it, they were beautiful.

So was it just these two women who were the anomaly, or was it my thinking that was wrong? After mulling it over for weeks, I couldn't fit them into my beliefs about beauty and what our culture had traditionally deemed as ugly. No matter how I looked at it, they just didn't fit the stereotype of what I had always considered 'beautiful' to be, and what I had feared and dreaded 'unattractive' to be - curvy.

And this is where the journey is up to. Undoing thirty something years of conditioning is hard work, but slowly slowly, I'm getting there. One day at a time, one thought at a time, one new outfit at a time... definitely new clothes. Always new clothes.
Posted by naomiwrites at 4:54 PM